8:00 am - A History of Hollywood Censorship 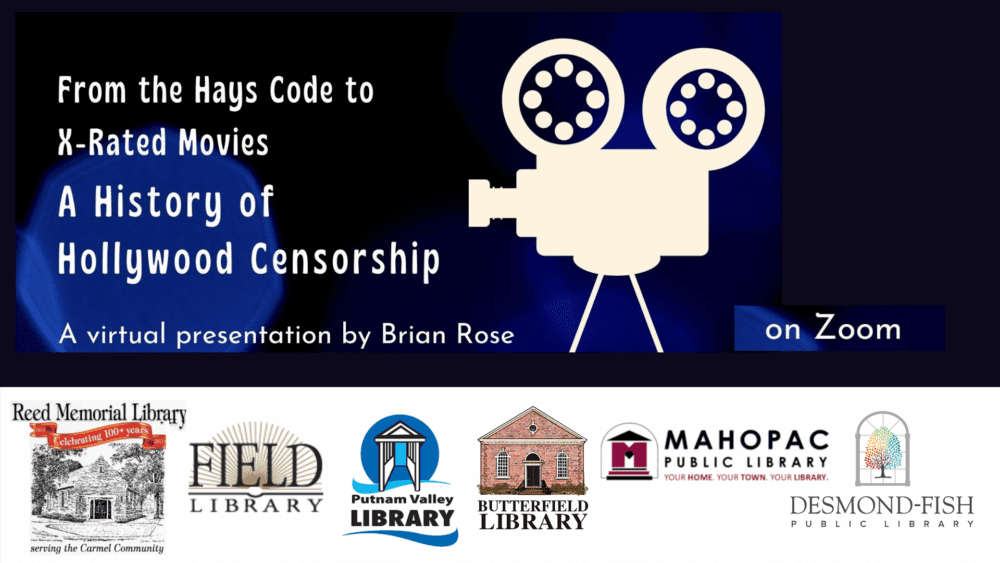 REGISTER HERE to join this Zoom presentation.
From its very beginnings in the 1890s, motion pictures have delighted the public – and upset civic and religious authorities who felt that movies needed to be regulated to protect “innocent” minds and discourage immorality.
As more and more cities and states established film censorship boards during the early 1900s, Hollywood recognized that needed to take some kind of action. the result was the 1934 Hays Code, which set up strict rules of language and conduct for studio films that lasted more than three decades.
As the times changed, the Code was replaced by the voluntary MPAA film rating system in 1968. And yet, fifty years later, the rating system of G, PG, PG-13, R, and NC17 films still continues to have its own set of problems.
This presentation will look at 125 years of movie censorship and the many ways Hollywood has tried to deal with this continuing issue. For more information call 845-628-2009, ext 100.
Co-sponsored by Reed Memorial Library in Carmel, Field Library in Peekskill, Putnam Valley Library, Butterfield Library in Cold Spring, Mahopac Public Library, and the Desmond-Fish Public Library in Garrison.