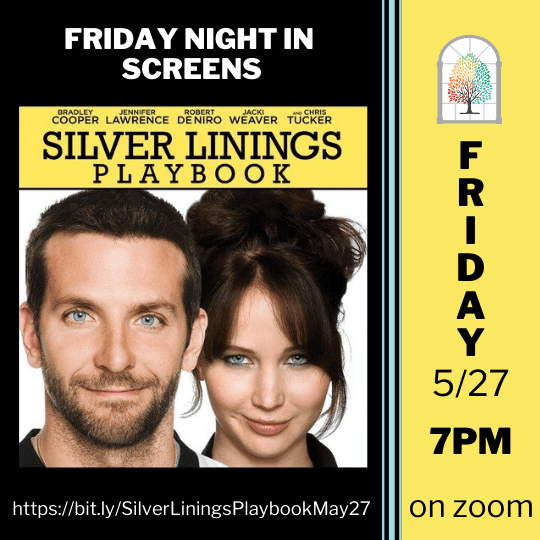 REGISTER HERE  to join Karen to watch Silver Linings Playbook on Friday, May 27th at 7 pm ET
About the Film
After a stint in a mental institution, former teacher Pat Solitano moves back in with his parents and tries to reconcile with his ex-wife. Things get more challenging when Pat meets Tiffany, a mysterious girl with problems of her own.
A star-studded cast including Bradley Cooper, Jennifer Lawrence, Robert De Niro, Jacki Weaver, Chris Tucker, Julia Stiles, Silver Linings Playbook was the first movie in more than three decades to receive Academy Award nominations for all four acting categories. Add in nominations for best picture, best director, best adapted screenplay, and best film editing, and it is understandable why many critics, and casual filmgoers alike, considered the film one of the year’s best. (The film ultimately only came away with one win: Jennifer Lawrence won the Oscar for best actress.)
But beyond the nominations, awards and critical accolades lies what may be the film’s most lasting impact: the conversation that it has helped spur on mental health. Since the film’s release, director David O. Russell and the stars of the film, including Bradley Cooper, Jennifer Lawrence, and Robert De Niro, have all spoken up about mental illness and placed a spotlight on a topic still not often openly discussed.
Helping introduce legislation, meeting with Vice President Joe Biden, and sharing his son’s own history with bipolar disorder—with his son Matthew at his side—Russell has taken the lead in raising awareness. In regards to the film, his directing creates scenes that, while fictional, appear to rip actual details out of the lives of those who have experienced mental illness themselves. Yes, the feverish story does come together nicely in the end for all those involved, which is not always the case for people living with bipolar disorder or other mental illnesses, but it accomplishes what many movies are supposed to do: provide a break from our own lives, make a connection and offer a little hope.