7:00 pm - The Power of Big Oil: A Climate Conversation 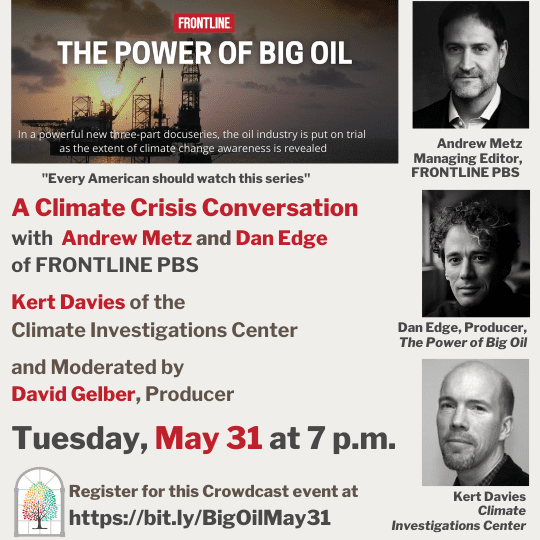 REGISTER for this Crowdcast event HERE

Join us for a Climate Crisis conversation with the creators of the new PBS Frontline Series THE POWER OF BIG OIL. We are excited to host Andrew Metz and Dan Edge of PBS Frontline, Kert Davies of the Climate Investigations Center, and David Gelber, executive producer of Showtime’s Years of Living Dangerously and the host of the Library’s ongoing series of critical conversations on climate change.

Denial, Doubt, and Delay: these are the episode titles of a powerful new must-see series: The Power of Big Oil. The narratives in the series chart in grim detail the efforts of the fossil fuel industry to deny climate change, sow doubt as to the causes and the evidence, and delay remedial action and the transition to renewable energy sources.

Andrew Metz, a former resident of Philipstown, is the managing editor of Frontline. The journalism he has overseen, characterized by fairness, depth, and transparency has received every major award in broadcast journalism and two Academy Award nominations. Andrew lived in Cold Spring with his family for seven years before moving to the Boston area to be Frontline’s Managing Editor and he and David worked together at 60 MINUTES
Dan Edge is Frontline’s award-winning senior producer, commissioning editor, and the series producer of THE POWER OF BIG OIL.
Kert Davies, director of the Climate Investigations Center, is featured in the series.